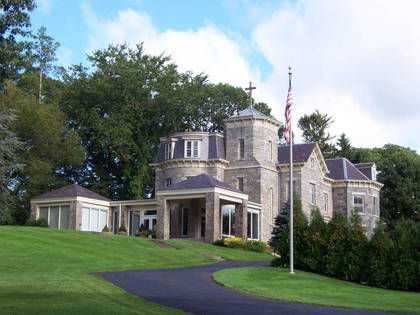 The Crane Manor House was built in 1852 by Charles Carmer using granite from the quarry near the Bronx River. In 1873 Col Alexander Crane purchased the house and expaned it into a 21 room mansion in the shape of a cross on an estate of 32 acres. Col Crane lived in the house until his death in 1930.

In 1943 Dr. Millar McClintock purchased the Crane estate including the Manor House. He had hoped to convert the house into senior citizen housing but the village did not approve the plan. In the late 1940's he therefore began to sell the property; part was sold for private homes and Stonehouse Road was made to encircle the Manor House.

In 1949 McClintock sold the Manor House and the remaining 4 acres to Trinity Lutheran Church. Trinity renovated the house for church use and had their first service in 1952.

Trinity was established on January 10, 1924 and soon afterwards acquired property on Alkamont and Scarsdale Avenues.

In 1949 the congregation celebrated its 25th anniversary and Dr. August Brustat was called as pastor.

From 1955 to 1979 Trinity operated a Christian Elementary School. Since 1979 the Alcott Montessori School has occupied the building.

The "Inviting Christ" statue, a gift from the Eichhammer family, was erected in 1964.

Rev Merlin Meyer succeeded Dr. Brustat and served as pastor from 1971 to 1997.

Dr. Merlin Rehm then served as pastor from 1998 to 2014 at Trinity. Under his direction the congregation grew and new actives such as Vacation Bible School have been introduced.

Pastor Ronald Rieger then served as an interim pastor from 2015 to 2017 at Trinity.

Pastor Naumann was called in the Summer of 2017 and has served as sole pastor to the present day. He has introduced many innovations such as uploading the divine service bulletin to the website, giving everyone the ability to follow the Sunday service on your own hand held device. Pastor Naumann uploads his latest sermon for viewing directly from the website! You can also follow pastor Naumann on his Youtube Channel and for other devotional materials On-line. Pastor Naumann has created a unique QR Code so anyone can look up the website instantly from any church flyer or poster. Pastor Naumann also regularly keeps up to date the Church Facebook Page.